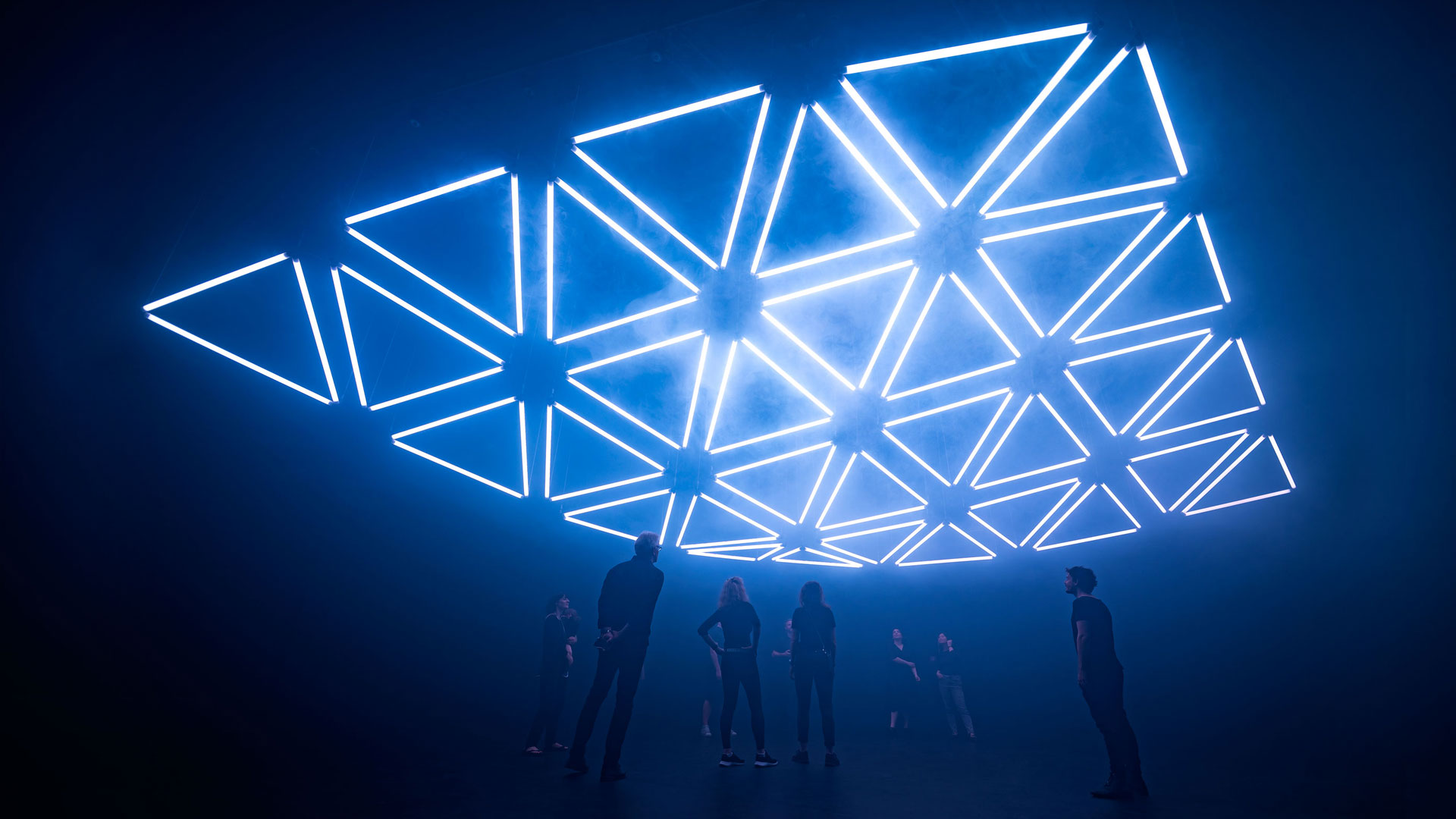 DARK MATTER is a parallel cosmos of expansive light installations in which the boundaries between the real and the digital world become blurred. Within the pitch-black rooms of a converted factory, the visitor embarks on a journey through seven partly interactive works. Light, movement and sound fuse into emotional choreographies of luminous shapes and colors.

Built across 1,000 square meters of exhibition space, DARK MATTER presents a range of multimedia installations. These vary from breathtakingly intimate light compositions, to interactive walk-in structures, and room-encompassing audiovisual performances. Some works are supported with a worldwide unique 3D-soundsystem. Each room possesses an own individual atmosphere that unfolds upon entry, creating a holistic and one-of-a-kind experience; a space to be enjoyed by visitors of all ages and backgrounds.

Behind this pioneering experience is visionary light artist Christopher Bauder and his design studio WHITEvoid.

DARK MATTER becomes a place of forward-looking experiments. In cooperation with other innovative technology partners, DARK MATTER operates as a space for continued experimentation. Fifteen years of technical innovation and creative vision come together in this collection of unique light installations, some of which have never been displayed to the public before. 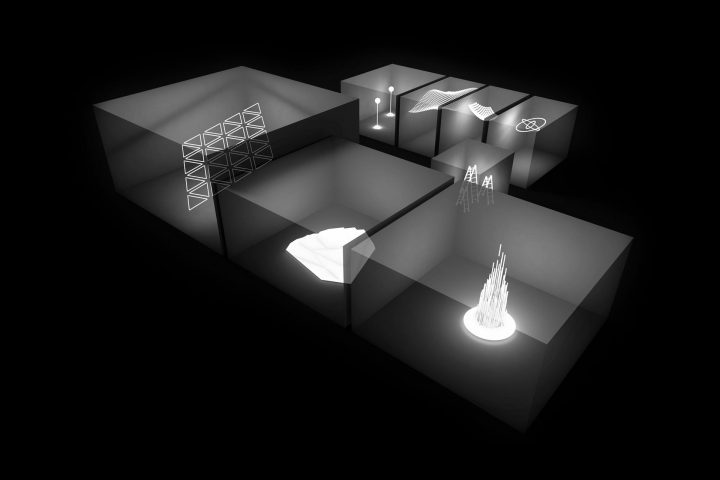 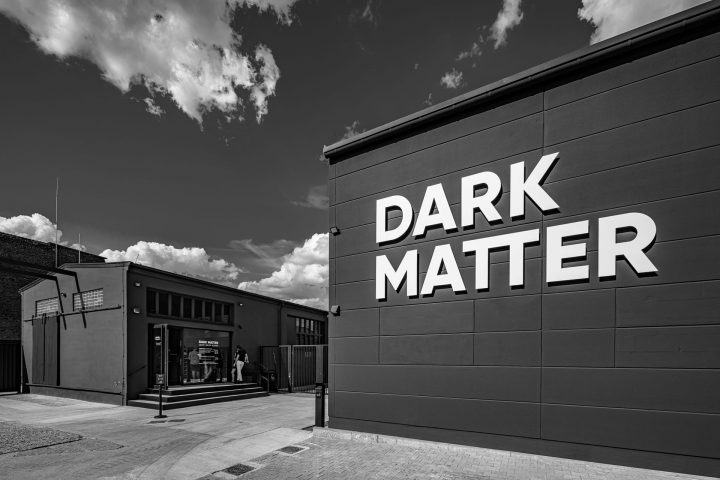 INVERSE combines 169 moving black spherical objects into a seemingly living entity. It forms a ghostly figure, like a flock of birds in synchronized flight against the bright sky.

From a dark amorphous form, a single-celled organism, a curious being slowly develops and seems to interact with the visitor. Monochromatic, sometimes threatening in its appearance, the ensemble presents in silhouette against the bright background.

INVERSE lives from the contrast between artificial movement and associative perception. Sometimes floating lightly and elegantly like a leaf in the wind, then again sinking heavily to the ground like a tough mass. The form and character of the kinetic sculpture continuously change. 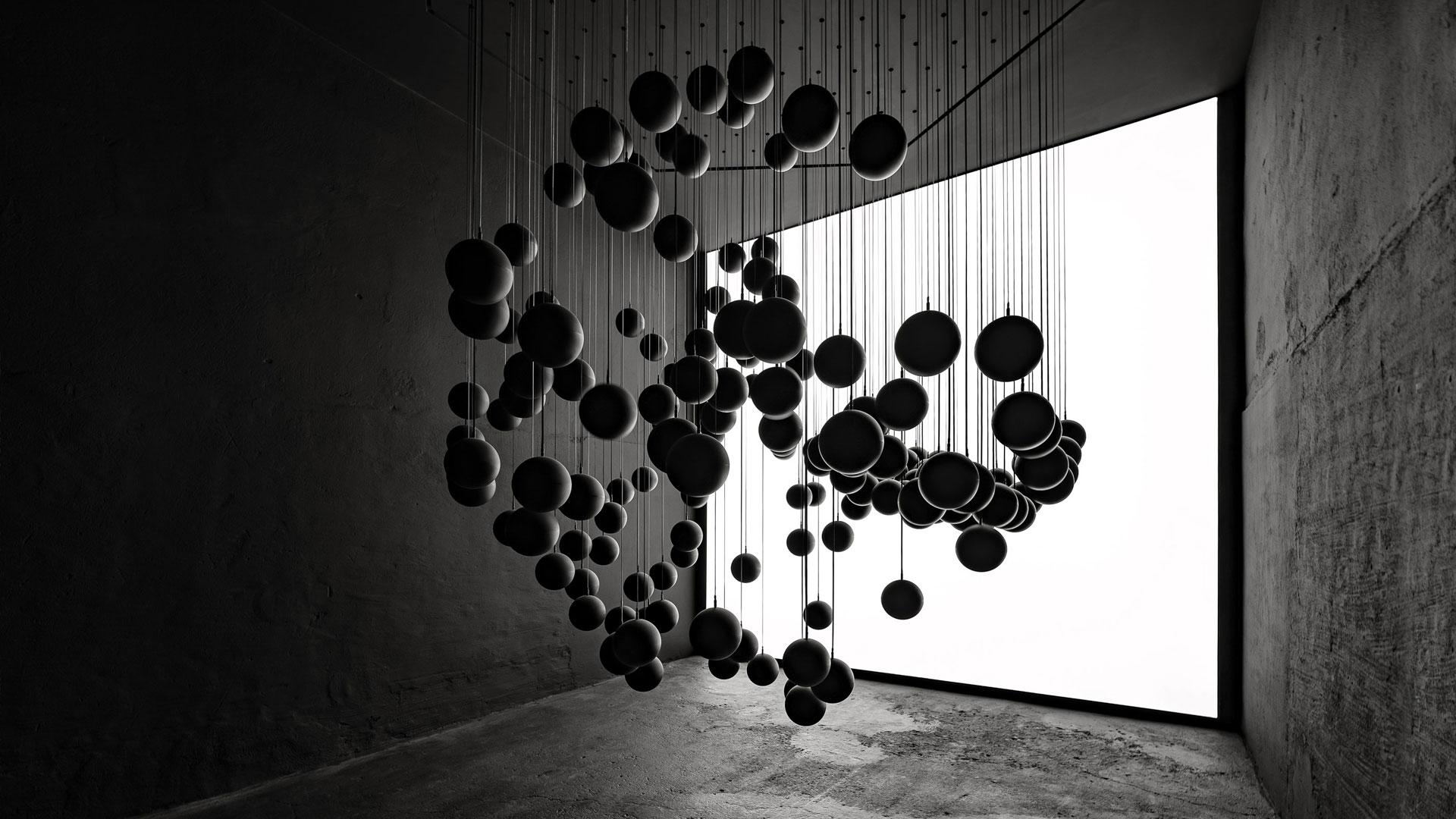 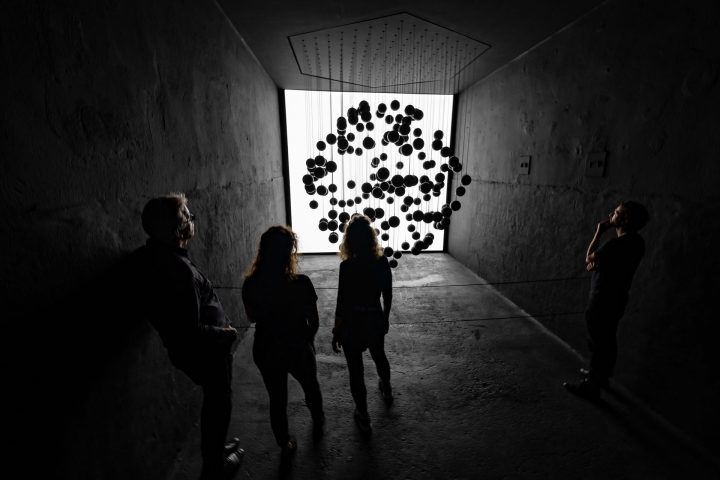 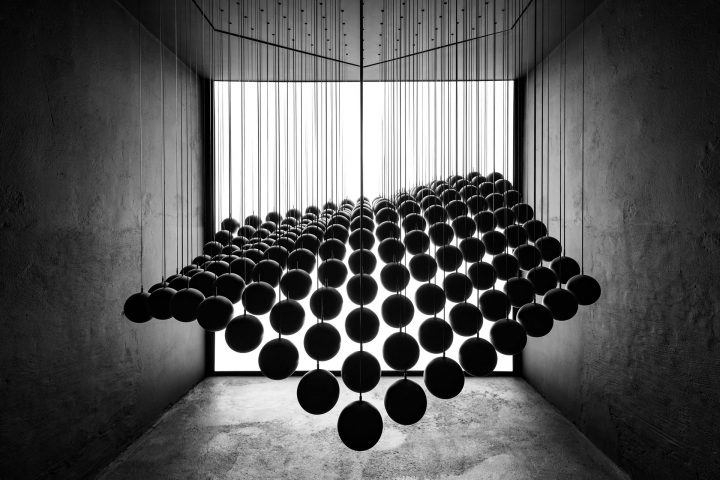 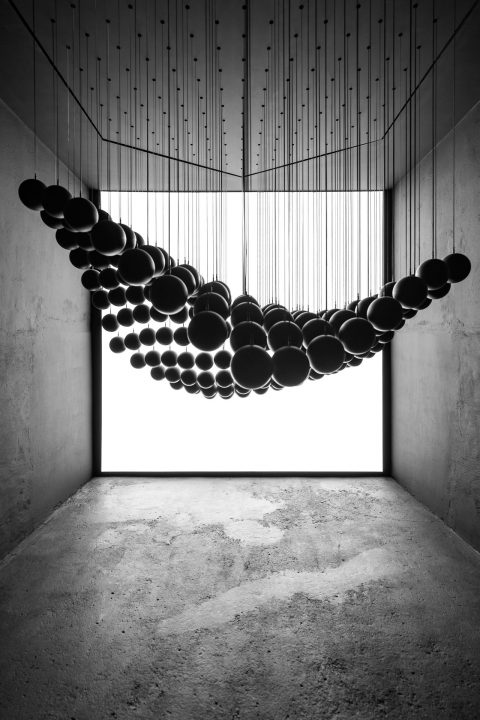 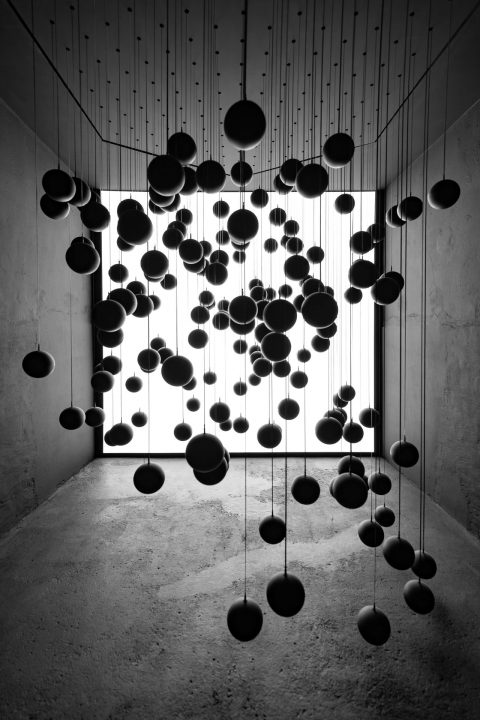 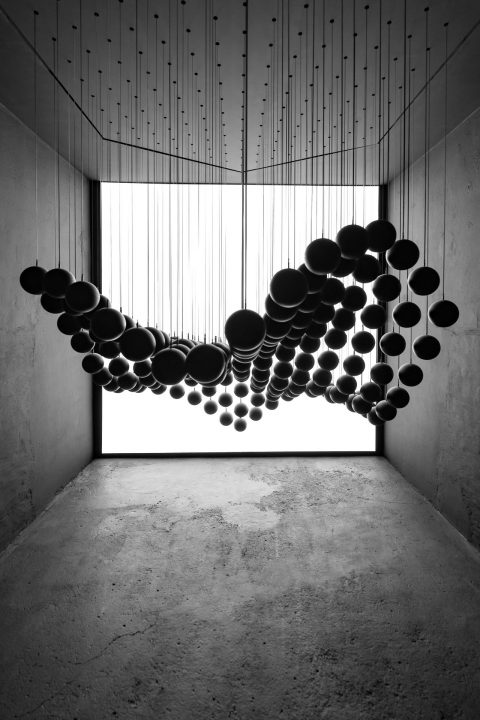 GRID combines kinetic motion, light and electronic music to create a giant audiovisual sculpture that hovers above the audience.

It symbolizes the merging of the digital and physical world. The kinetic installation is a tangible embodiment of a computer generated dynamic surface.

Like a chameleon, GRID continuously adopts new forms and colors. At times the installation appears weightless, as a flying carpet woven from threads of light. At others, it becomes an alien vessel, threatening to dive and engulf the audience, only to dissolve into a crackling cloud shortly thereafter. GRID is enduring and fleeting at the same time, an endless transformation of dreamlike sequences. 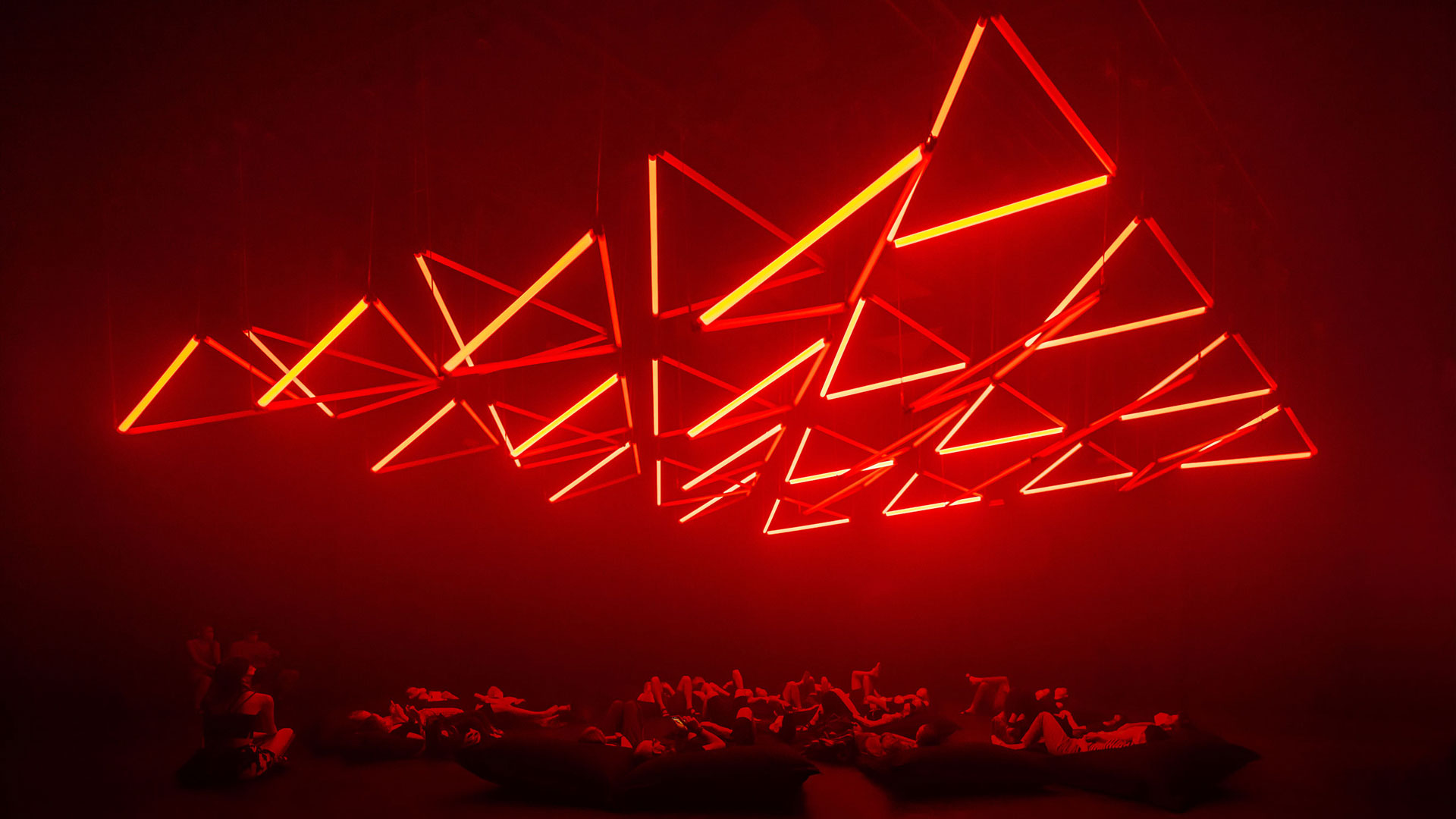 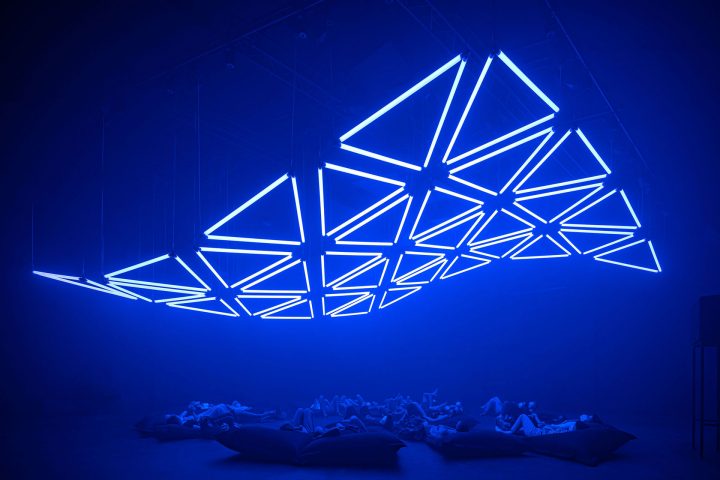 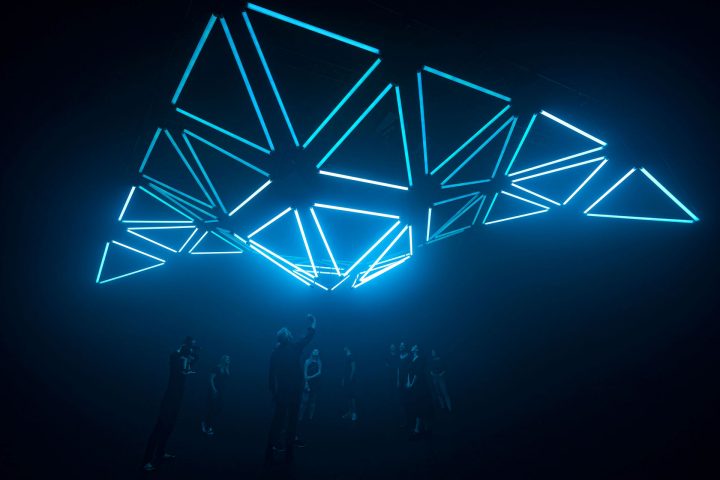 POLYGON PLAYGROUND translates a computer-generated object into real space. A seamless 360-degree projection covers the surface like a digital skin that reacts to its environment via sensors.

POLYGON PLAYGROUND is a playground for all ages, inviting visitors to experiment. By interacting with the object, everyone becomes part of the work and directly influences its appearance.

The interactive surface plays with perception and gives the impression of the ground moving under feet. A constantly changing, digitally expanded sculpture is created for visitors to climb over, walk around or lounge upon. 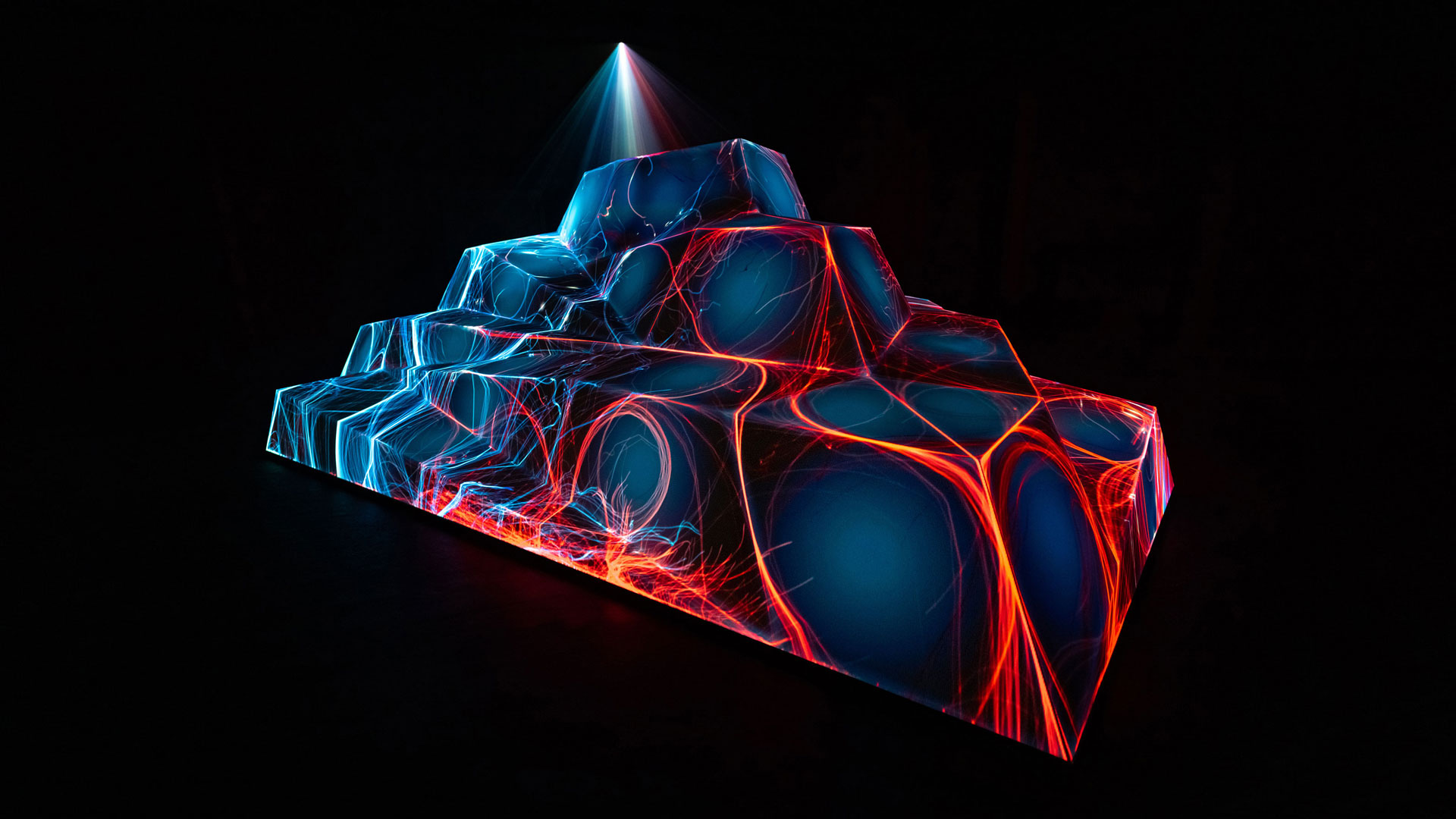 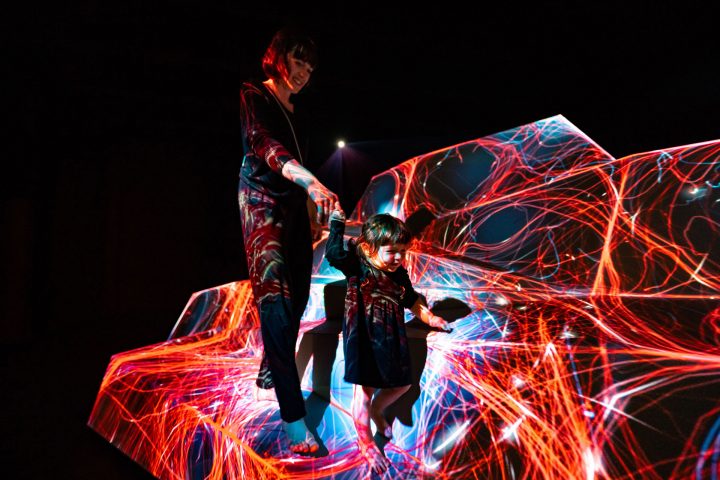 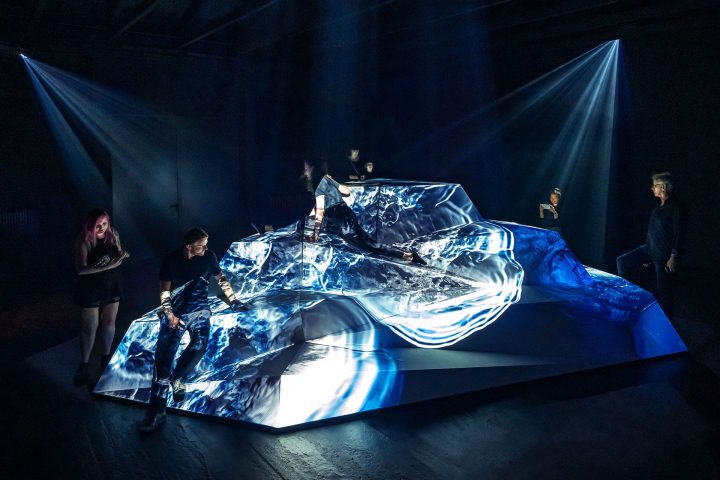 This installation uses modern technology to simulate an archaic institution – the Bonfire.

Digital technology creates the illusion of sitting together with friends around a campfire under a starry sky. A memory, which surely everyone shares. You can almost feel the warmth of the digital flames. For a moment one is reminded of the deeply rooted longing for shared experiences in and with nature.

But BONFIRE also addresses the way in which people are moving further and further away from nature. They are destroying it and then feel the need to bring it back in a controllable way as a simulation using technology. 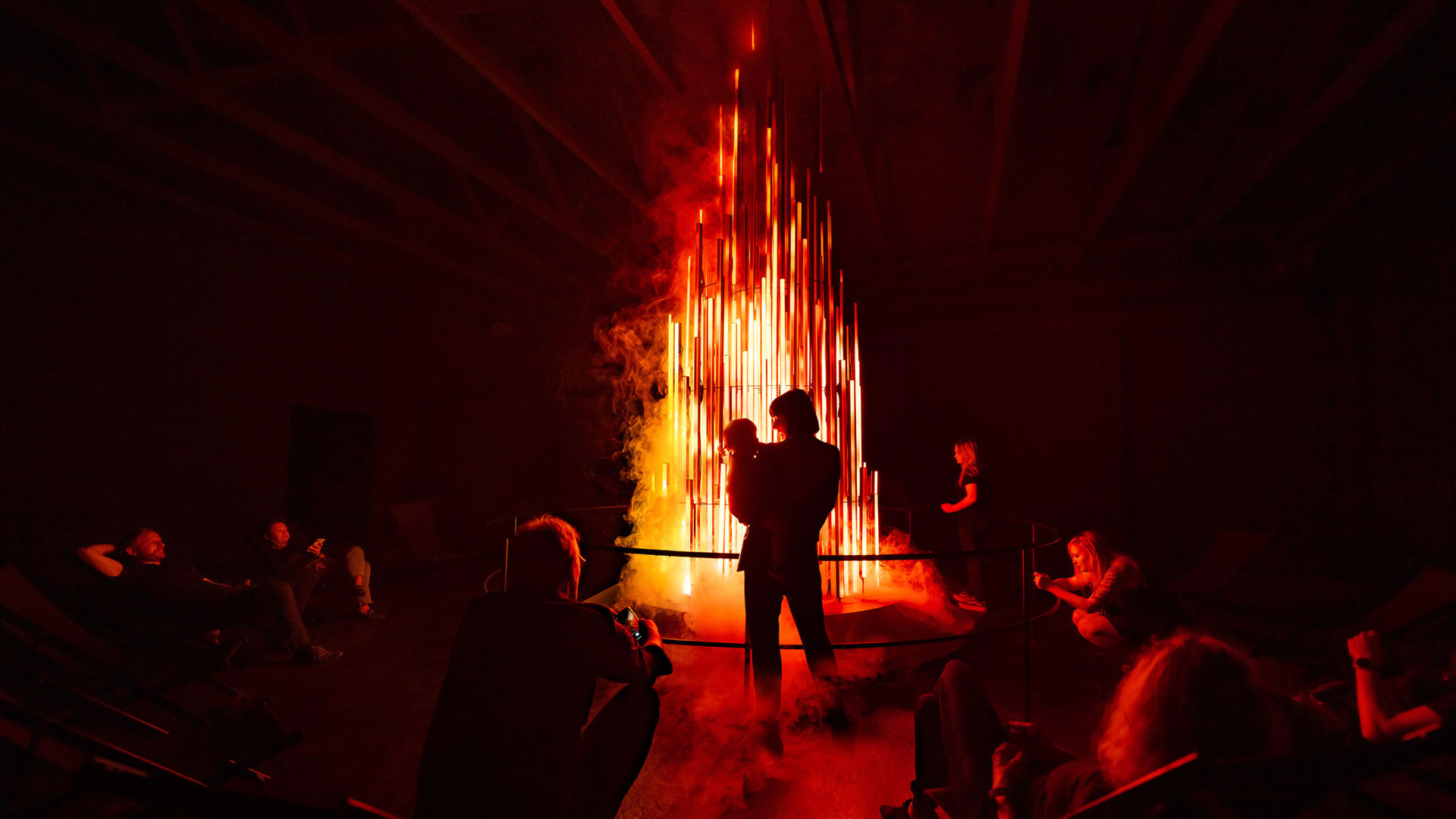 CIRCULAR is a hypnotic ballet of three rings of light that perform a weightless dance in the void of darkness.

Held in suspension by an unknown force, this perfect trio conveys a feeling of freedom and connectedness. The three mechanical actors find themselves in a continuous interplay of unity and independence.

The rings stand as symbols for endlessness and perfection. In harmony with the electronic score, the pulsating light animations and elegant movements create a calming meditative mood. 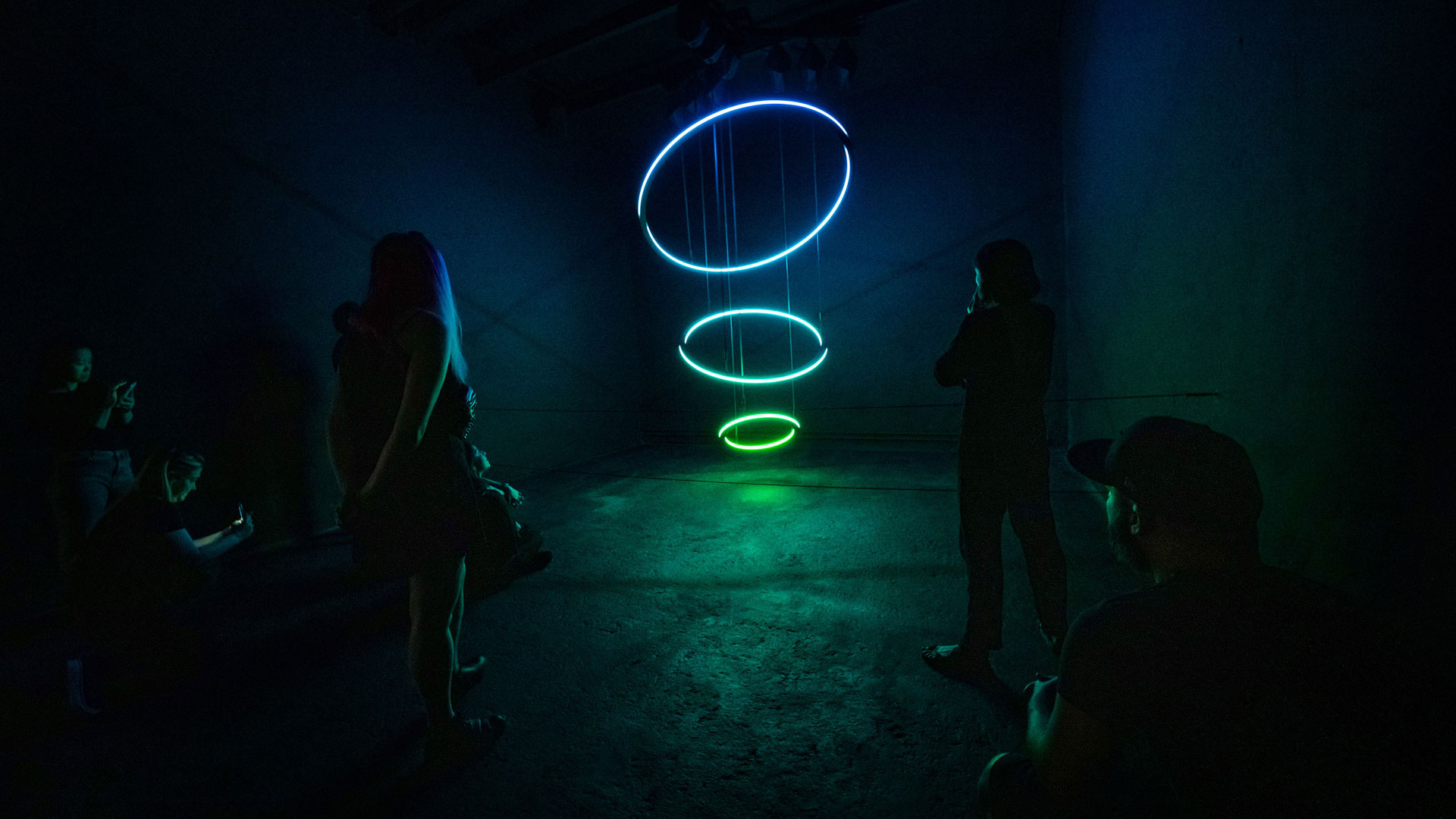 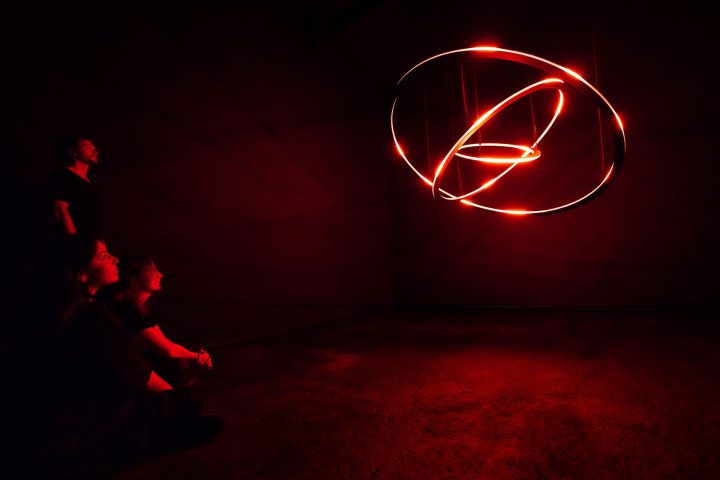 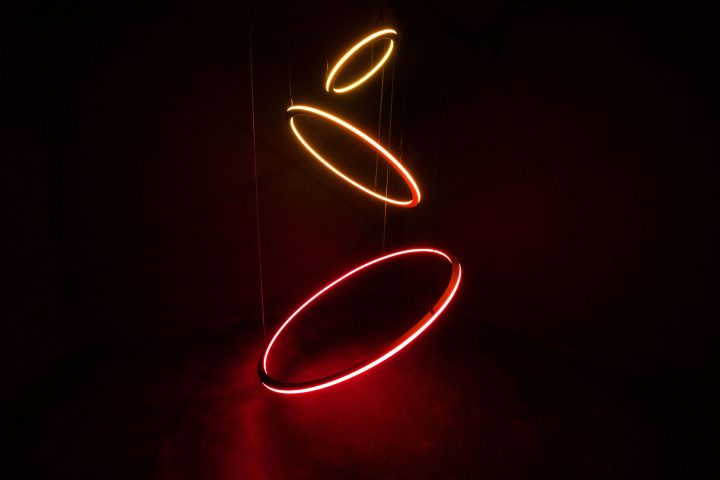 A household ladder extended with sensors turns into a real musical instrument. The ordinary ladder becomes a TONE LADDER.

If you step on a rung or touch it with your hand, a sound or rhythm is created that varies from step to step. An individual piece of music is created by climbing up and down or by touching several rungs of the TONE LADDER at the same time. Whether in pairs as a duet or with several people – a whole band is quickly formed.

​Each sound played simultaneously triggers an associated light animation. The interaction of the visitors with each other and the TONE LADDER creates a new audiovisual live concert again and again. 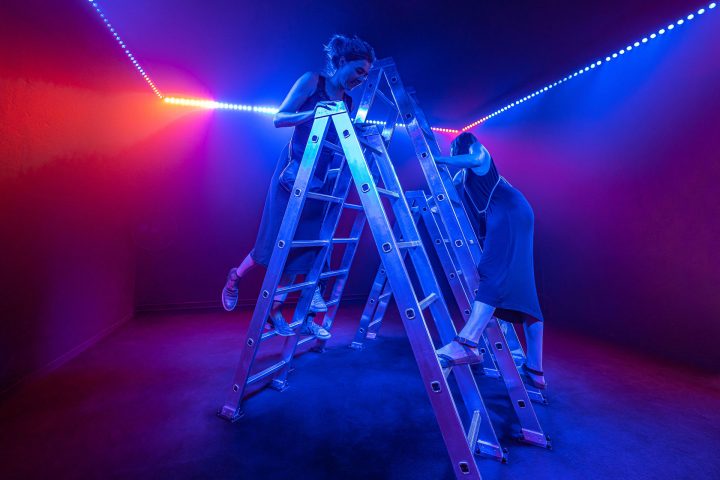 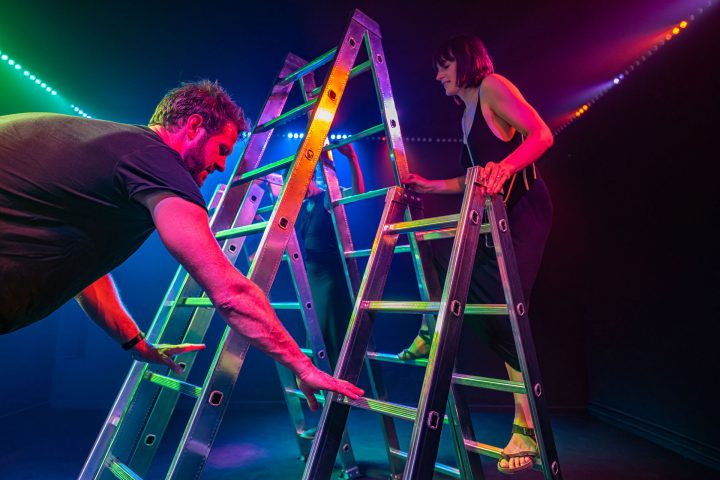 LIQUID SKY consists of over 800 individual light points which together form a coherent surface.

The additional mirroring of the entire room creates an endless light horizon that sparkles like a starry sky or seems to glitter like a river surface in sunlight.

Both the three-dimensional surface and the light animations are the result of complex computer simulations that imitate forms and movements from nature. Continuous algorithmic variations create a sky of “liquid” light. 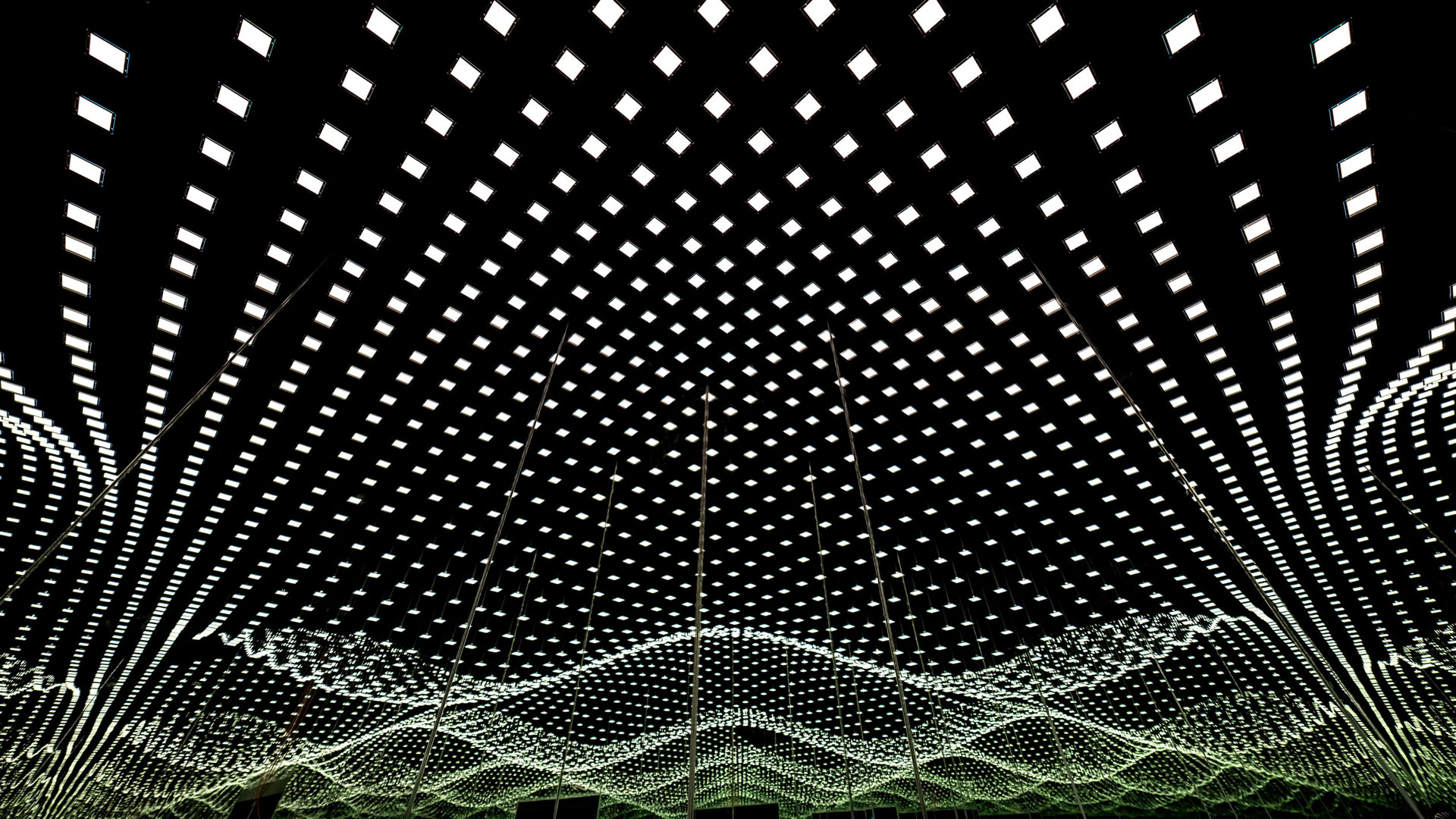 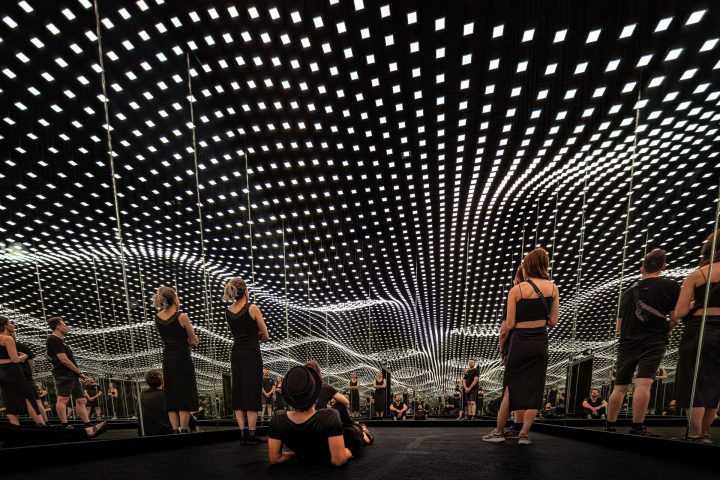 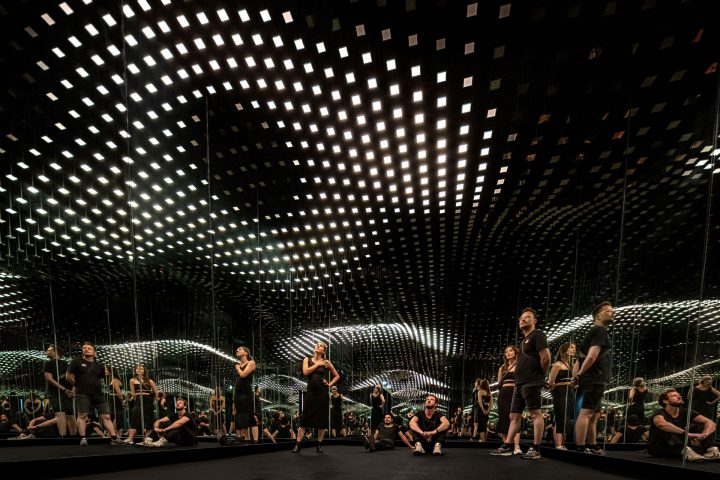 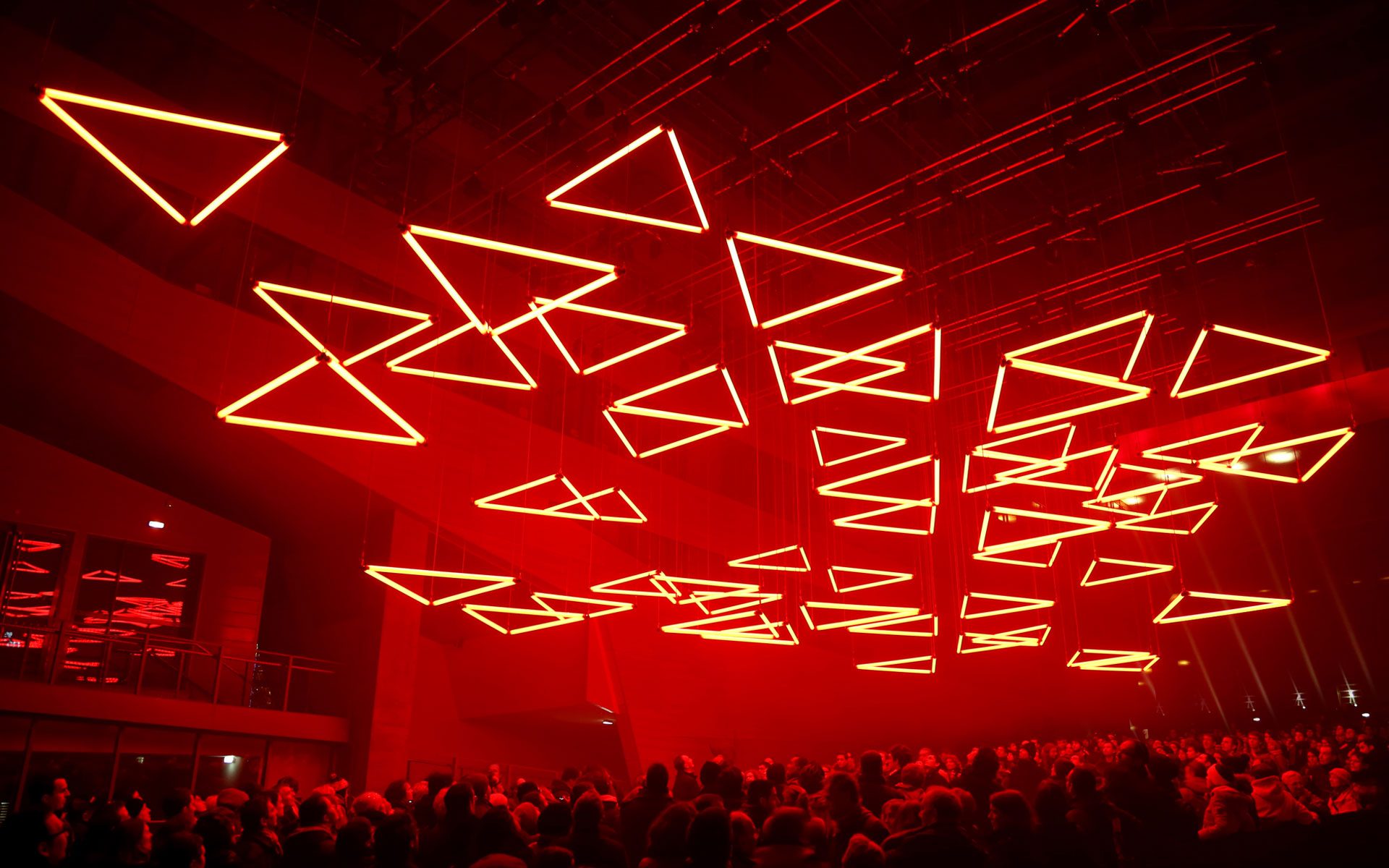 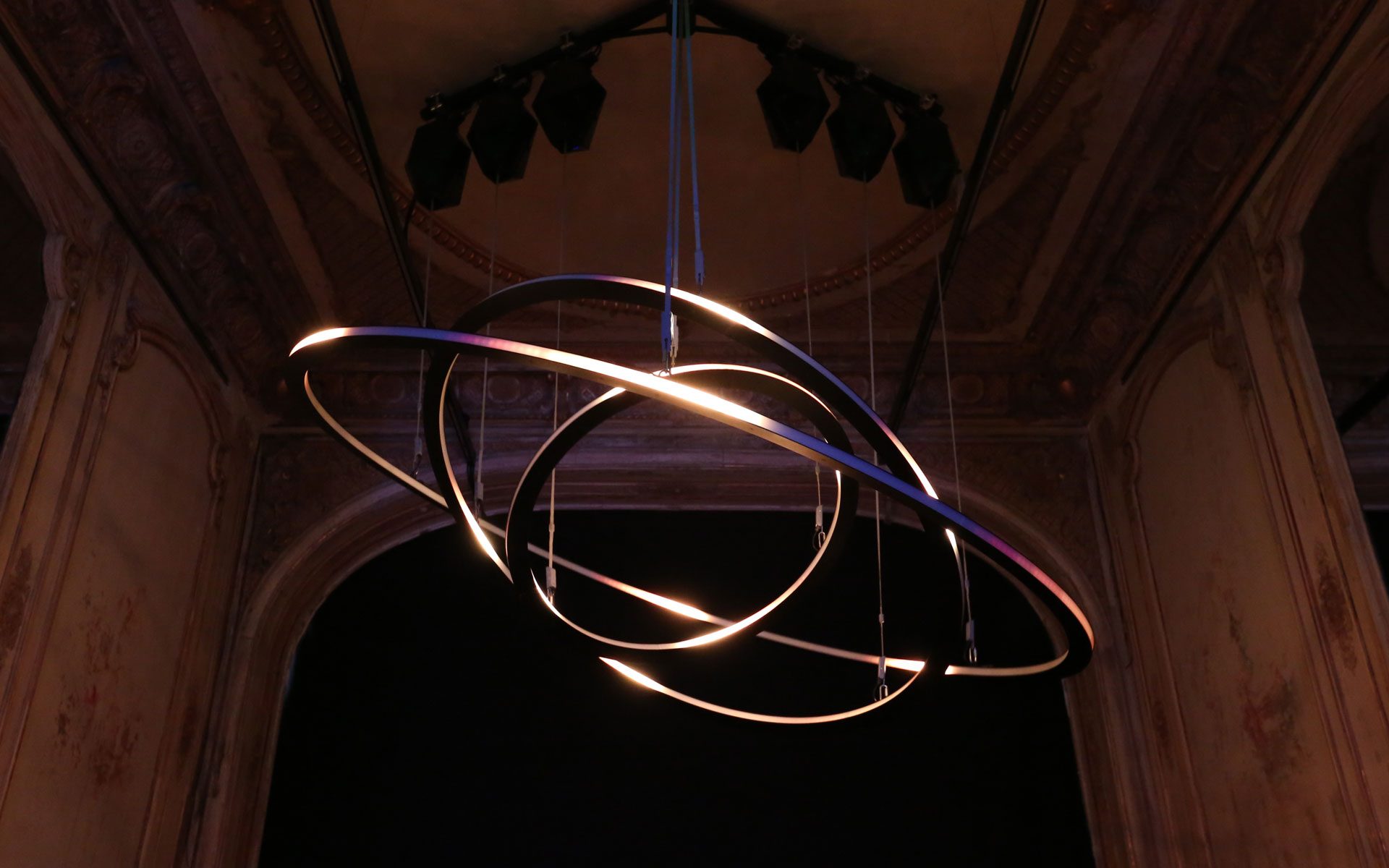 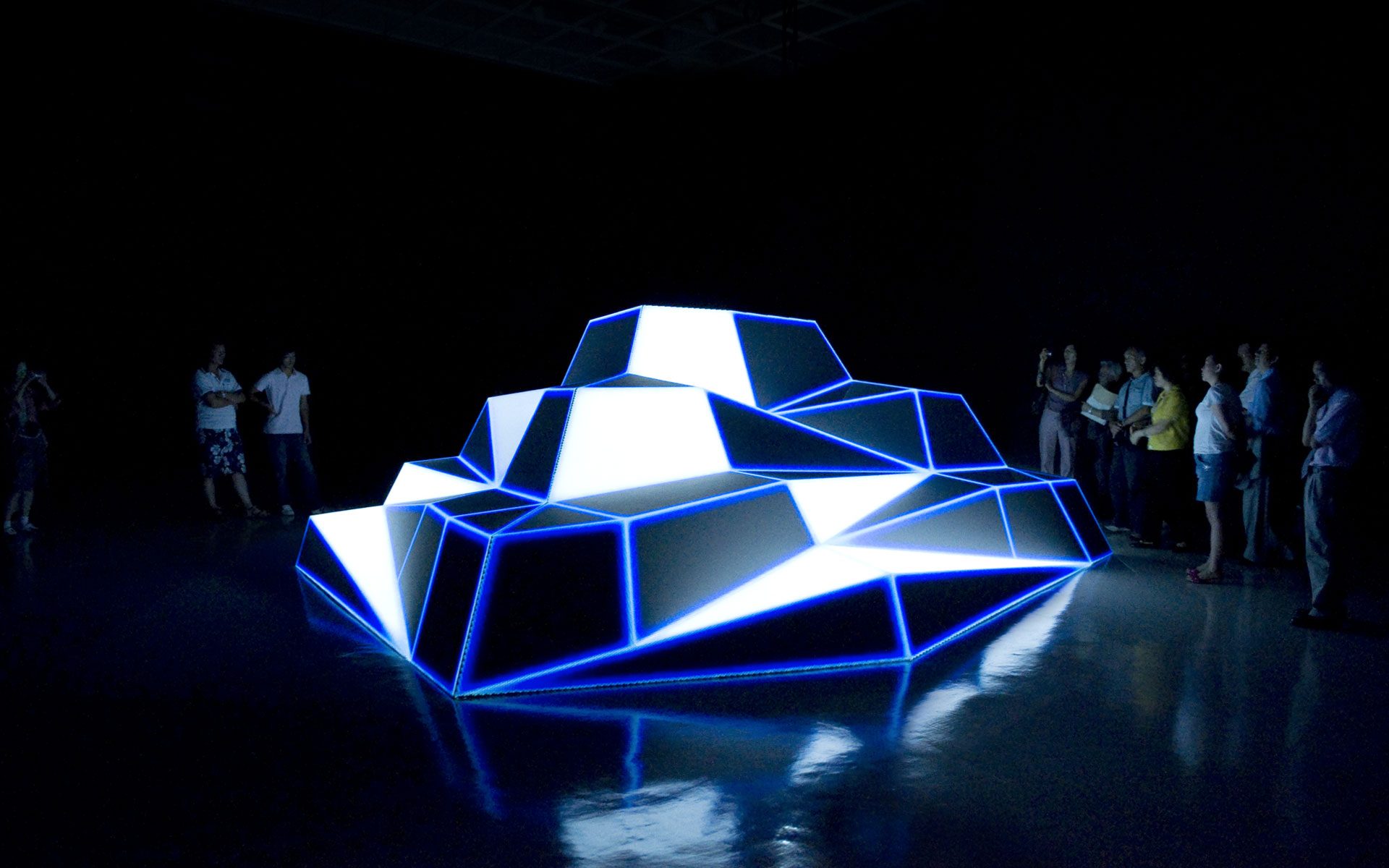 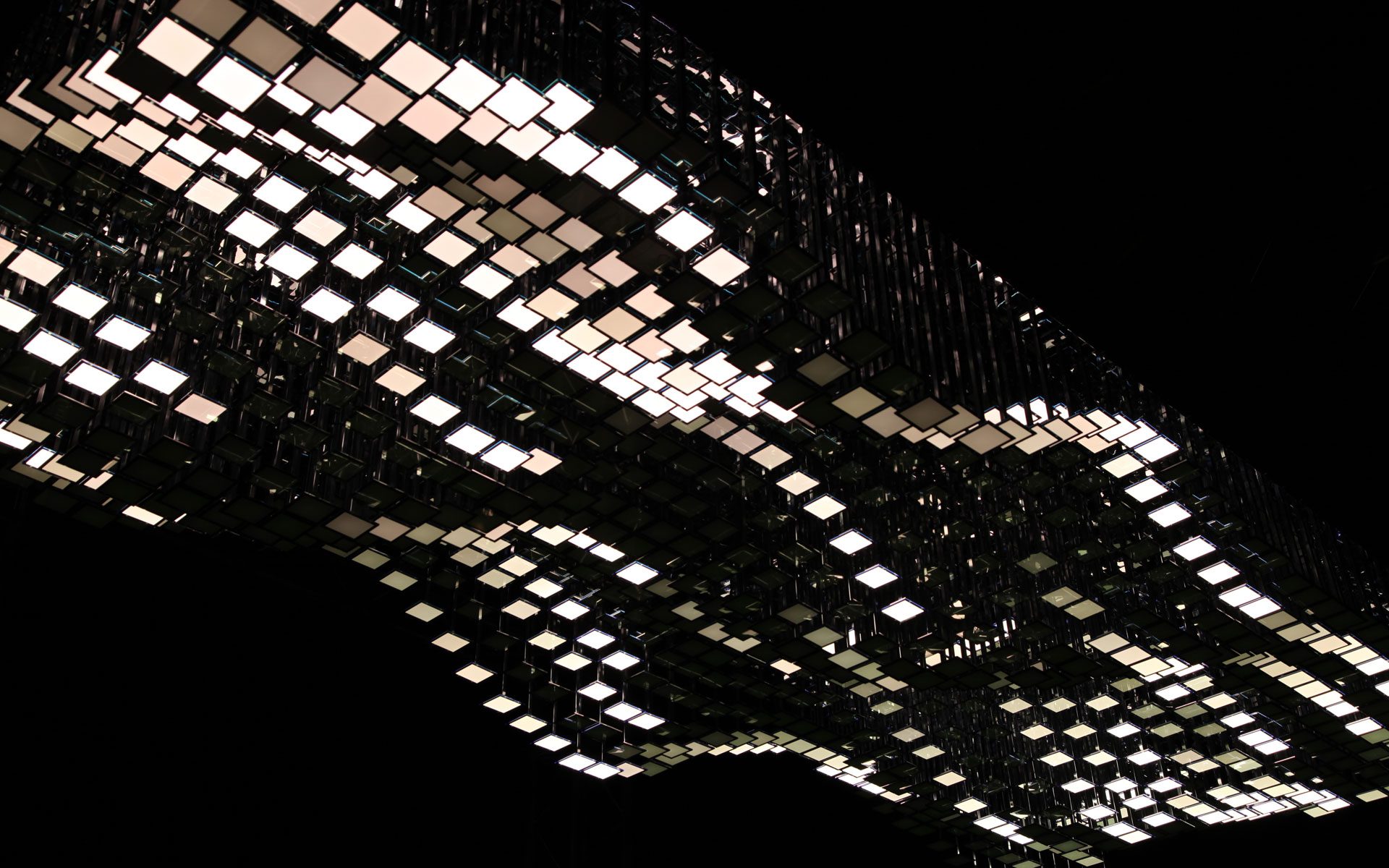 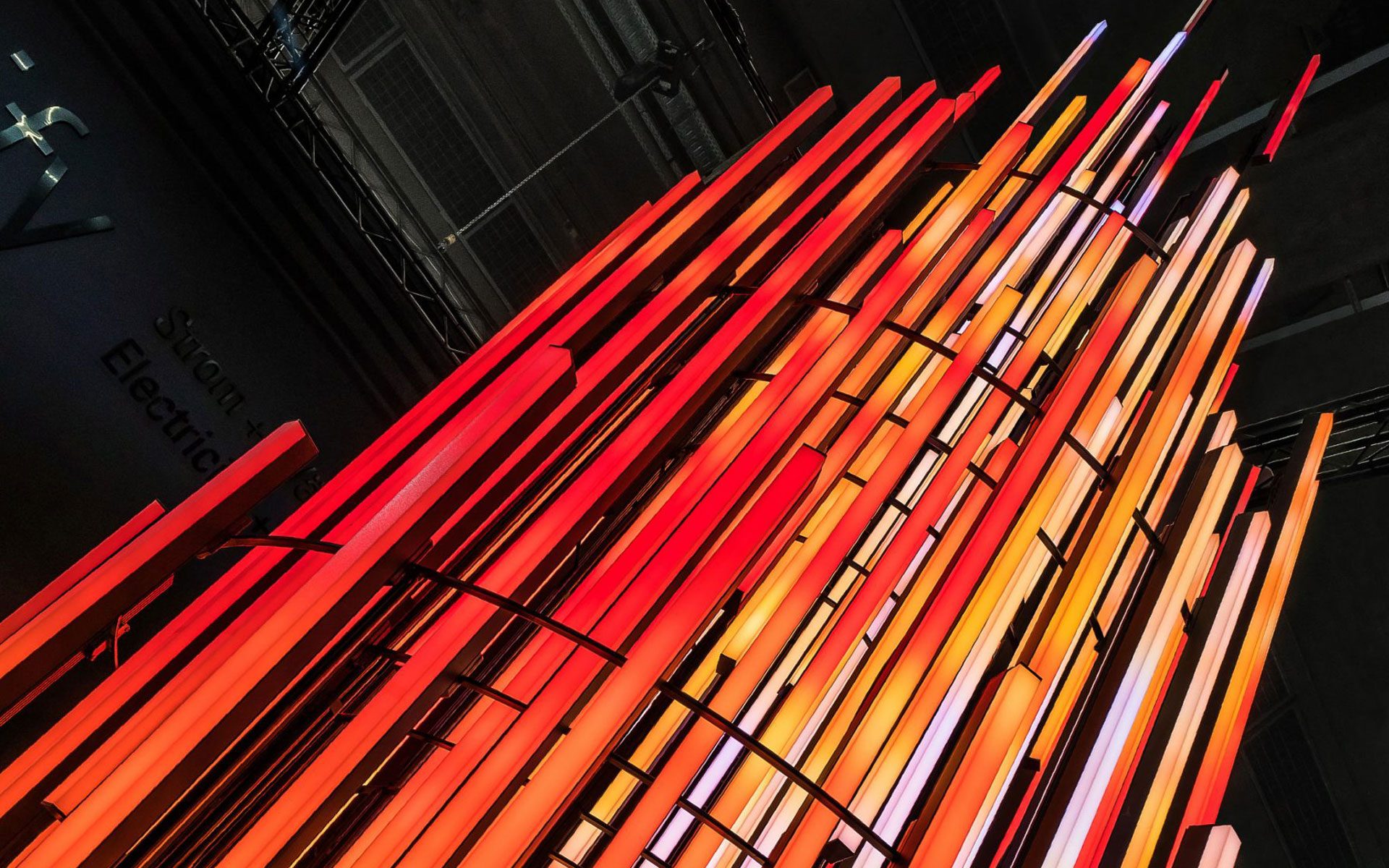 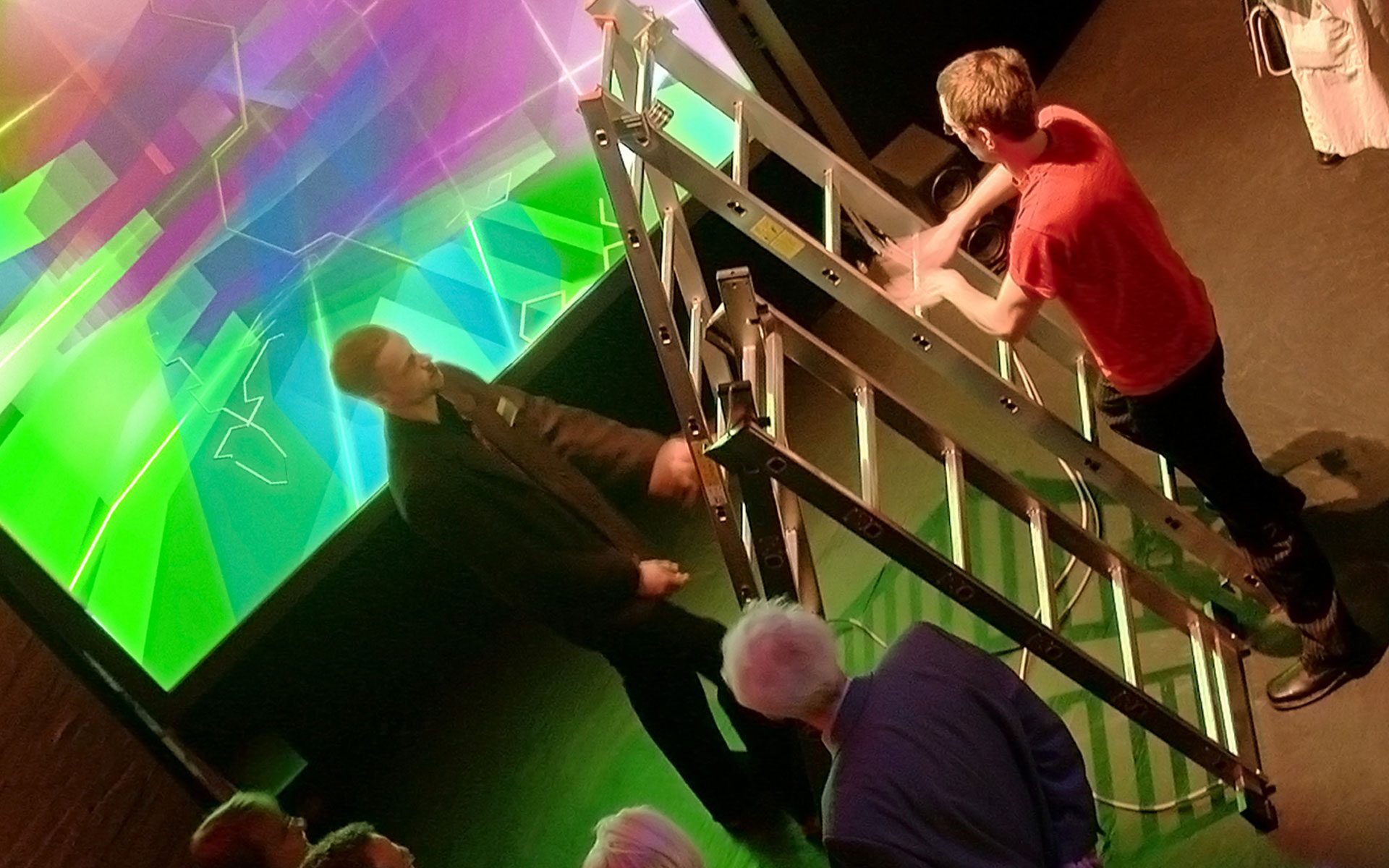